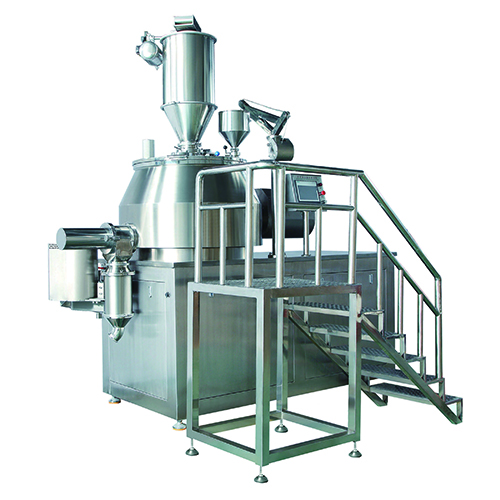 The granulation is conventionally done in the adhering to process actions:

1. Combining of dry product at high impeller as well as chopper rates for a few minutes.

2. Enhancement of liquid binder by putting it on to the powder, while both the impeller and also chopper are going for a reduced speed.

3. Wet massing with both agitators running at broadband.

2. With the rotating shaft hermetically filled with air, rapid mixer granulator can prevent all dusts from compact.

3. HLSG-300 rapid mixer granulator with a structure of conical hopper tank, all material can be in uniform rotation.The tank is laid with an inter layer on the bottom, in which water cooling circulation system featuring higher thermostatic performance than air cooling system is furnished, which leads to improve the quality of particles.

4. With automatic lifting of the pan cover, the tank outlet matching with drying device, self-equipped arm-ladder, it is easy to operate this High Shear Mixer Granulator.

5. Lifting system with paddle is more beneficial to clean paddies and pot body.

6. HLSG-300 rapid mixer granulator is the structure of horizontal cylinder (cone).Fluidization granulation, the finished granules are similar to roundness with good liquidity.

7. Each batch of materials will be dry-mixed for 2 minutes and be granulated for 7-14 minutes. Compared with traditional process, it has improved by 4-5 times.

8. All the processes of dry-mixing & wet-mixing & granulating are finished in a closed vessel. So that it has reduced the process and also compiles with GMP standard.