HLSG-30 mixer granulator is the structure of horizontal cynical tube (cone). Each batch of products will be dry-mixed for 2mins and also be granulated for 7-14 minutes. All the procedures of dry-mixing & wet-mixing & granulating are finished in a shut vessel.

1. HLSG-30 mixer granulator took on frequency rate adjustment to manage the mixing blade and cutter, very easy to regulate the size of fragment.

2. With the rotating shaft hermetically full of air, mixer granulator machine can stop all dusts from compact.

3. HLSG-30 mixer granulator with a structure of cone-shaped hopper tank, all product can be in uniform rotation.The container is laid with an inter layer on the base, in which water air conditioning flow system including higher thermostatic performance than air cooling system is furnished, which results in boost the quality of bits.

4. With automatic training of the pan cover, the storage tank outlet matching with drying gadget, self-equipped arm-ladder, it is simple to run this HLSG-30 mixer granulator.

5. Raising system with paddle is a lot more valuable to tidy paddies as well as pot body.

7. Each set of materials will certainly be dry-mixed for 2 minutes as well as be granulated for 7-14 minutes. Compared with conventional process, it has actually improved by 4-5 times.

8. All the procedures of dry-mixing & wet-mixing & granulating are ended up in a shut vessel. To make sure that it has actually lowered the procedure and likewise compiles with GMP standard. 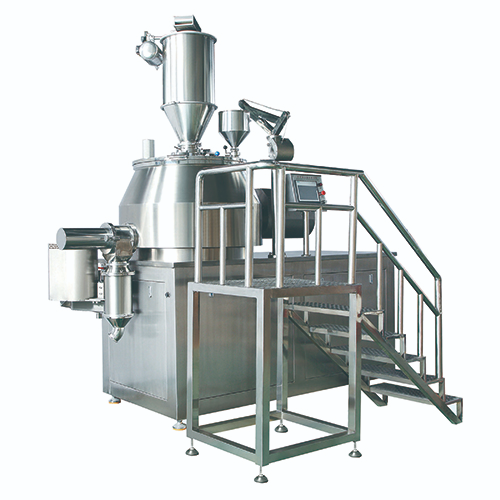 HLSG-30 super mixer granulator Impellers: Impellers are repaired at the end of dome shaped stainless steel bowl. It has completely length and also two half-length blades. Impellers are created such a manner in which little blade raise the product as well as complete size blades press the material to mix well. These impellers separate the wet mass into small pieces as well as granules.

Fast Mixer Granulator Chopper: These are specifically designed small blades located at the bottom of the dome. The primary function of chopper is to cuts the swellings right into smaller sized pieces those are mixed equally by impeller and aids the dish or splashed onto the powder to accomplish a much more uniform fluid distribution. It turns at high rate (1440/2880) RPM to offer simple and also consistent granulation. The speed of chopper is accountable for the size of granule. Chopper does not have any kind of substantial result on the granule size when impeller rate is high (above 200 RPM).

Trustar has actually been giving pharmaceutical equipment for years. Granulation tools is among the products we have actually been providing, high-shear blending granulators or rapid mixing granulators. It includes a small-capacity system modeled for R&D and industrial-scale machinery, and also is used for drugs according to cGMP standards. Continuous and mass production.