The powder mixer made by Trustar is widely used in pharmaceutical, food, chemical, etc. It can mix powdery or granular materials with good fluidity very uniformly, so that the mixed materials can reach a mixed state. In the prior art, the powder mixer usually has only one rotation direction, which is similar to a drum washing machine. During the mixing process, the powder is easily segregated and accumulated due to centrifugal force. 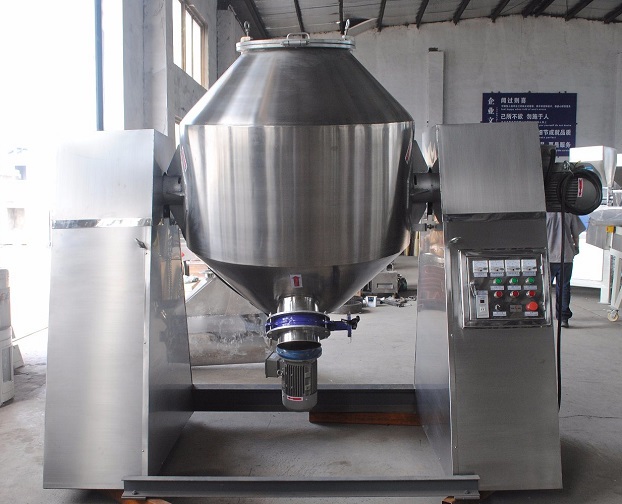 Wherein, the basic assembly includes a base, a power box installed on the base, and a mixer housing that is rotatably connected with the power box;

The unloading assembly is installed on one side of the base and located below the mixer shell, and includes four hoppers surrounded by iron plates, the hoppers are funnel-shaped and hollow at both ends;

A method for mixing medicinal powder mixer is characterized by comprising the following steps:

1. The operator pours the powder to be stirred into the mixing drum and covers the automatic baffle;

2. Start the equipment, drive the motor to work, and drive the stirring paddle to rotate at a high speed;

3. While the stirring paddle is rotating at high speed, the first motor works, and outputs power to the mixer shell through the power box, which drives the rapid mixer granulator shell to rotate at low speed;

4. After a predetermined time, the drive motor and the first motor stop working, and one of the mixing drums is located directly above the hopper;

5. The electromagnetic relay controls the automatic baffle to separate from the mixing drum, and the powder falls into the hopper;

6. The first motor starts again and controls the mixer shell to rotate clockwise. Each time it rotates 90 degrees, one of the mixing drums will stay directly above the hopper;

7. Repeat 5, that is, the electromagnetic relay controls the automatic baffle to leave the mixing drum, and the powder falls into the hopper until all powder in the mixing drum is finished.

Beneficial effects: The present invention relates to a pharmaceutical powder mixer, which is fully automated from mixing to discharging. The super mixer granulator has four stations, that is, four mixing drums can simultaneously stir and mix the powder, which improves production efficiency; While high-speed rotation is used to mix the powder, the mixer shell is also rotating at low speed, that is, the whole mixer has both auto-propagation and revolution rotation modes, which makes the mixing more uniform and avoids the material generated by the centrifugal force during the mixing process. The specific gravity produces the effects of segregation and accumulation; through the predetermined execution code, the device can automatically stop after the stirring is completed, and the automatic baffle is opened to complete the feeding operation; in summary, the present invention has high efficiency when stirring the powder Uniformity and high degree of automation.